Abrash in oriental rugs is a term used to describe the variation in colour throughout the field of a piece.  This is generally more common in tribal rugs as the weavers only have a certain amount of dyed wool to hand.  When they require more wool to continue weaving then the new batch may not match exactly and the result is a rug with many different shades throughout the pile.  As you can see from the rug below the abrash is very obvious, almost precisely across the middle of the rug. 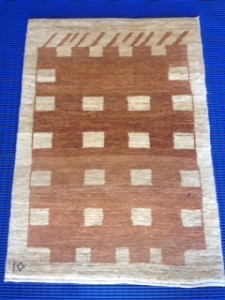 Sometimes during the weaving process the wool itself may appear to be the same colour, but over time the dyes may oxidise or fade at different rates,

Abrash in Persian and oriental rugs is so common that it has almost become desirable and many machine-made rugs are now being constructed with abrash deliberately woven into the design in an attempt to make the rugs appear more authentic. 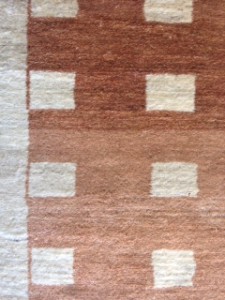 Abrash can become more apparent after cleaning a rug as the soil may be disguising or masking the effect.  The soiling process happens slowly over time and the lessening of the abrash may not be noticed, but after cleaning the rug is returned to its original condition, exposing the characteristic once again.

We are open as usual but not currently operating usual office hours.  It may take us slightly longer to respond to your enquiry, but we WILL get back to you.

Thank you for your understanding.