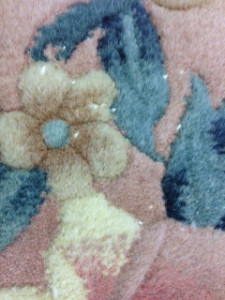 White Knots in a Chinese Rug

A customer from Bracknell brought this Chinese rug in for cleaning and noticed that it had white knots scattered randomly across the field of the rug.  White knots in Oriental rugs and carpets are very common.  They may not be noticeable immediately if the rug is fairly soiled, but the rug cleaning process tends to expose them.

Randomly scattered throughout the field

White knots are caused when the foundation of the rug breaks during the weaving procedure.  The weaver then has to tie a knot to fix the break and to carry on knotting the rug.  Most knots will be pushed to the back of the rug so that they don’t become noticeable.  The ones that aren’t pushed to the back are hidden in the pile.  The problem is when the rug becomes subjected to regular foot traffic, the pile will slowly wear, eventually exposing the little white knots. 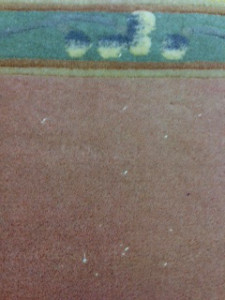 The white knots may not be noticeable to start with, as during regular use the knots attract soil and become hidden.  It’s only when the rug is professionally cleaned that they really stand out.

The knots can be spot dyed or pushed through to the back of the rug with a needle.  However most spot dyes may be removed when the rug is cleaned next time.

White knots should not be thought of as a defect within the rug, but more of a characteristic as they are revealing an element of the rug’s history.